Work is something that has always been part of the living experience. Throughout the ages, people have always done some sort of work. As early in the Bible as Genesis 2:15, we read that The LORD God took the man and put him in the Garden of Eden to work it and take care of it.(NIV). In some of the earlier ages of human existence, work was mostly limited to fieldwork; tending to crops and animals. Today work can include anything from fieldwork to working as a high executive at a major business firm. Throughout the mid 1900s, America experienced the wave of the women’s movement, which gave woman the right to work in job fields that have typically been limited to men. Throughout my preteen years, I remember watching TV shows from the 1980s and being drawn to hardworking female characters. As I watched them, confident, well respected, and influential, I knew that I too wanted a career someday. For me, it was never about money, but rather contributing something to society. The characters on those shows were like big sister figures, telling me that yes, I have a voice and I too can succeed in a career.

I believe that it’s important for people to work in some way, shape, or form. Work is not limited to a career, it could mean the stay-at-home-mom who works to take care of her kid(s). Some of you reading this blog might have aspirations or dreams to become a famous singer or actor. You may be wondering what you ought to be doing right now. Personally, I believe that even if your end goal is to become a famous singer, it’s still important to have an “ordinary” job in the mean time. Kelly Clarkson was a waitress before she was a majorly successful pop singer. There is something inherently human about working, it was commanded by God even before the Fall. I think that the first time I really experienced the value of work firsthand was when I was thirteen. I had written a manuscript of my first book to try to self publish. Self publishing costs money, and being that I was only thirteen, I didn’t have a whole lot. My parents agreed to pay for part of it, but I had to come up with the remainder. Thus, my Dad had me work in the yard with him to earn the money to publish my book. There were days that I sweat like never before, but I was determined. After a lot of hours working, I earned my share of the money that I had to come up with to publish my book. The feeling of productivity and accomplishment was incredible.

I believe that working towards our goals, even if the work only looks like serving tables, makes the end goal seem a whole lot more special. Furthermore, by working, we have the chance to contribute to the well-being of society. For instance, waiting tables may not seem like a lot to you, but to the tired family coming home from a road trip, it’s a major blessing. I challenge you to, throughout the week, look at the work you do, no matter how “small” through a different set of eyes. Colossians 3:23-24 says Whatever you do, do your work heartily, as for the Lord rather than for men…It is the Lord Christ whom you serve. 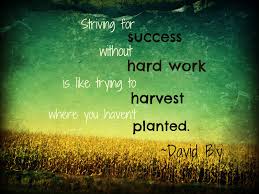