Individuality is probably one of the most discussed topics in modern day society; you cannot go on a social media website without seeing some sort of quote about being yourself. Be yourself is one of the most widely used themes in many well known movies throughout the decades. Everywhere you turn, you hear messages about embracing your individuality, but what does that mean? The definition will likely vary a little for everyone, but to me it means accepting the person God created you to be. It would make sense that as creations, we ought to look to our Creator to find out who we are and who we’re meant to be.

Psalms 139:13-14 says, “For you created my inmost being; you knit me together in my mother’s womb. I praise you because I am fearfully and wonderfully made; your works are wonderful I know that full well.” Emily P. Freeman, in her book A Million Little Ways; Uncover the Art You Were Made to Live, says “I can’t imagine anything more dangerous to the enemy of our hearts than people who know who they are.” If we know who we are, we’ll be less apt to fall for Satan’s lies about who he tells us we are. Though the concept has been secularized by some, I believe that it remains a pretty spiritual concept. If we know who we are, we’ll be better able to find God’s purpose for our lives. A big part of this, is being honest with ourselves about our personalities and passions.

Being that I have a couple of teen years in my rearview, I’ve experienced (And am still experiencing) some of this process. I’ve gone through a good deal of different stages, which have resulted in some interesting photographs. In jr. high school, I went through a stage where I looked like Laura Ingalls Wilder with glasses and acne. For a brief period of high school, I went through a phase with small colored hair extensions. Those were fun, but a bit of a pain.

Nonetheless, discovering who you are goes much deeper than hair and clothes phases. It’s something that you often find bits and pieces of when you least expect it. I remember taking a short, unofficial, free version of the Meyers Briggs Personality Test during my freshman year of high school. Prior to that test, I always saw myself as an introvert. I’ve never been someone who feels comfortable in large crowds, and I sometimes feel like hiding behind a very large object in a new environment. Thus, as you can imagine, I was surprised to see my Meyers Briggs results say I’m extraverted. In retrospect, it makes sense, as I tend to gain energy around people, even if I’m somewhat shy and reserved. Another surprise came during that same year, when I discovered my passion for communicating through song. Watching movies about characters who wrote songs made me want to try my hand at it myself. Little by little, I began using songwriting as a medium to express emotions and beliefs, and found that I loved it. I still write songs, and hope to get them published someday. In addition to discovering a love for songwriting, I’ve also discovered that I enjoy singing and I have begun taking voice lessons.

True, these are all relatively small pieces of myself, but each piece brings us a little closer to the person God created us to be. You can’t define yourself by things like extravert or songwriter, but those things bring out deeper parts of your personality. In my songwriting, I’ve found a sense of carefreeness in myself that I might not have discovered otherwise, being that I often tend to be a bit on the uptight side. In my extraverted-ness, I’ve come to see how being around other people makes me feel alive. Each piece of yourself is part of the larger picture of you, and each person is part of the larger picture of God’s creation. If you look at the journey of finding yourself in this light, it becomes something bigger than you: God and living a meaningful life that touches the lives of others. Everyone has a purpose and a voyage in life, and finding out who you are as a person, and who you are in Christ, is one of the first steps to beginning that voyage. 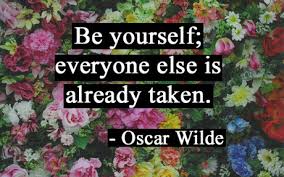