In both mainstream society and the church, feminism is a topic that I’ve found is gaining traction in recent years. Thus, I believe it to be a relevant and important topic to talk about. 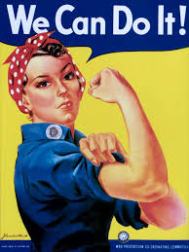 Because it’s an incredibly broad term, I’m going to try to be clear on definitions, as feminism often means drastically different things to different people. Nonetheless, for the purpose of this blog post, I’d like to specify what feminism, the way I’m using the term, is not.

Feminism is not akin to being pro-choice. I’m pro-life, but agree with aspects of the feminism movement that promote equal education and job opportunities. I do not believe feminism and political positions on abortion to be connected, thus, that will not be a focus of this post.
Feminism is not man-hating or bra-burning. This is a horrible misrepresentation of the topic and while some radical feminists may have this attitude, the vast majority do not. Speaking as someone who supports feminism, some of my closest friends are guys and I’m thankful for both the men and women who have made this world a better place. I am also thankful for all of the awesome guys who follow this blog and listen to my random thoughts and ideas.
Now that I’ve cleared that up, I’d like to explore how feminism-the affirmation of both male and female as God’s special and unique creations-can be best practiced in Christian churches and marriages in a way that glorifies God and empowers our sisters in Christ.

The two words that will frequently emerge in conversations surrounding gender roles and the church are egalitarian and complementarian. Egalitarians (Such as myself) believe that the Bible supports mutual love and submission in marriages and equal leadership roles in the church. Complementarians believe that there is sort of a hierarchy-order of things in creation, and typical believe that women in leadership is not Biblical and a women must always be under complete submission of a man.

Since this is an incredibly multifaceted topic, I’m going to break my posts up into three different categories. The first post (this one) is going to focus on what Jesus, the Gospels, and Biblical values teach about feminism. The second part is going to focus on leadership roles in the church. Lastly, i’m going to conclude with a post about what I believe a Christ centered marriage should look like.

When discussing any social issue, Jesus should always be at the center of the conversation, and if you read through the Gospels, Jesus’ attitude towards women was revolutionary for the time era. He ate with both men and women without discrimination, and essentially told Martha to “get out of the kitchen” and learn, something that was unheard of and discouraged during the Biblical days. Not to mention that it’s explicitly recorded in scripture that women were the first to find Jesus’ empty tomb, even though their testimony wasn’t seen as valid by society in court. Furthermore, while Jesus could have easily specified the Great Commision to men, Jesus simply says “Go”, seeming to imply that He wants both his sons and daughters to spread the good news of God’s grace. Rather than limiting women from being missionaries and teachers, He chose to include them in His story of redemption, affirming equal value and love for both genders and encouraging them to work alongside each other as couples, siblings, neighbors, and friends.

Lastly, as countercultural as these two topics have become in modern society, I believe that the Christian virtues of modesty and purity are feminist-affirming in nature. Because humans are born with a fallen nature (both men and women), God specifically instructs guidelines that call both genders to respect each other. He instructs them to see each other through the lens of God, respecting their worth, rather than using each other. When a guy and girl are both seeking God’s will, respect is bound to follow. Both self respect and respect for the other person are essentials to any healthy relationship.

I could easily delve deeper into these topics alone, but I believe that the information presented gives the strongest evidence for Biblical feminism and an egalitarian viewpoint. My prayer for this mini-series is that we can grow in respect and love for each other as a church family, encouraging both our brothers and sisters in Christ live up their full potential. The two greatest commandments are to love God and love our neighbor, and I pray that this series helps us navigate one way of living this out as the body of Christ.

10 thoughts on “So What About Feminism?”